Two grey-haired, balding, Italian New Jerseyan guys want to teach you how to do a “choke” in Jujitsu. The shorter, less athletic one of them gets down on all fours. When the taller, stronger guy’s opponent is down on all fours from the previous choke whereby the bigger, stronger guy has subdued his opponent to his hands and knees, he should still have the choke grip high up on his opponent’s neck, and now in this new position, brings his leg over the his opponent’s back to control his opponent and the taller, stronger guy needs to stay down, hugging his opponent with his body. With his opponent’s head down, he slaps the spot on his opponent’s thigh, multiple times, demonstrating where he is going to grab. He grabs and rolls his opponent onto him, thrusting his legs around his opponent until he can control his opponent on the right and the left and has completely subdued his opponent. Obviously, his opponent can’t move from this choking, lying-subduing, hold. Now the smaller, weaker guy, with the hard but soft face, should be tapping out, but he looks like he can’t really breathe. Or move at all. Suddenly the vanquisher realizes the vanquished has gone limp and started snoring. The big, strong guy slaps the limp guy on the chest. The limp guy doesn’t wake up. “Hey, Jim! Jim! Ohhh my Gawsh!” 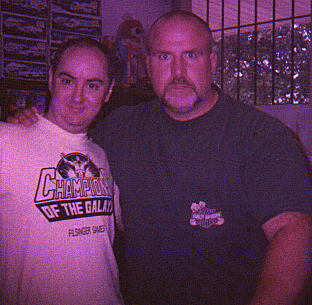